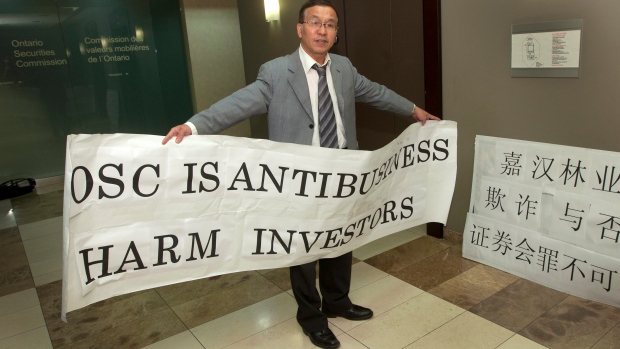 Ontario’s securities watchdog is warning investors to stay away from an investment manager who marketed himself as the Chinese Warren Buffett, but in reality turned out to be more like Toronto’s Bernie Madoff.

The Ontario Securities Commission took the unusual step of issuing a press release Tuesday cautioning investors not to do business with Weizhen Tang, the former head of the Oversea Chinese Fund LP,  who was sentenced to six years in prison in 2013 for fraud.

“Mr. Tang recently announced his intent to resume investment activities, adding that he plans to create an investment fund targeting individual and institutional investors that would offer returns of one per cent per week,” the OSC said in the release.

Tang is permanently banned from Ontario’s capital markets and may not solicit investments or provide investment advice, the OSC said.

Tang was at one time a high-profile member of Toronto’s Asian community. He hosted gala charity events, wrote extensively about investing for Chinese language media and published a book entitled: “The King of 1% Weekly Investment Return: the Chinese Warren Buffett (My Way to Warren Buffettian’s Wealth).”

Tang raised more than $50 million from investors, which he promised would mostly be stowed away in safe government bonds. However, when the stock market turned during the 2008 financial crisis, the funds were revealed to be little more than a Ponzi scheme that paid old investors with money from new ones.

Tang maintained his innocence and, in an interview with Business News Network at the time, claimed he was being railroaded by regulators and the courts.

Tang represented himself at his criminal trial in 2012 and even called Canadian regulators “destroyers of businesses” when he took the stand. A jury deliberated for four hours before returning a guilty verdict.

This is Mr. Weizhen Tang , I am now very proud of being a convicted by OSC  like Ms. Wanzhou Meng. OSC is attacking Chinese Businessmen and their companies.

I am not trading Ontario Securities and open a Canadian or Ontario brokerages accounts for you to take advantage of us.

We are not giving up and we are fighting with you.

I have no interest to have an investment fund in Toronto or Ontario .

I am so happy to make news again and thank you very much.  I love your attention and warning so I can get a free ride.

I don’t know how trade securities or have a fund in Ontario .

I  have no intention to have a fund in Ontario and raise money from Ontario investors for you to freeze again and for your legal colleagues.  I am not stupid.

I may have a fund outside of Ontario or Canada  in the future, where you can’t touch .

I don’t and couldn’t trade securities and could not open a securities account in Ontario because of OSC . The world is so big that I can do it without you.